Swansea dental practices are successfully piloting a system which is freeing their time and helping them take on more patients.

Instead of being measured against activity targets, two practices have instead been asked to focus on prevention rather than cure.

Already at one practice this new way of working has led to them seeing over 3,000 more patients.

Traditionally, NHS dentists were paid according to how many ‘units of dental activity’ they carried out, but this led to dentists being driven to meet their targets, rather than focusing on giving out oral health advice.

Now though, they are being relieved of those targets and encouraged to concentrate on preventing cavities rather than filling them.

This is being phased in gradually all across Wales, but it’s been pioneered in Swansea by two practices that have shown it is better for patients, better for staff and actually improves access to NHS dental care.

Eastside Dental, based in the Beacon Health Centre in Swansea’s SA1 district, is one of these practices and had all its units of dental activity (UDA) targets taken away when it joined the pilot scheme. The other practice is Belgrave in Uplands.

“The idea behind the change was to help people do more to look after their own teeth on a daily basis so that they don’t have to visit the dentist as often. This in turn gives more people access to NHS dentistry,” said Paul Ridgewell, the principal dentist at Eastside.

“We asked to join the pilot because instead of being driven by targets, we wanted to focus on what was best for the patient. Under the UDA system you end up chasing your own tail and meeting the target becomes all-consuming.”

Paul’s innovative approach has seen his practice expand from a one-man clinic in Port Tennant to state-of the art facilities in SA1, looking after more than 13,000 patients with 32 staff. Some 95 per cent of their work is with NHS clients and some of the more famous private patients include the Swans and the Ospreys.

David Morgan, Eastside’s customer service manager, said: “The old way of working was not patient focused and the real danger was that patients were assessed for the number of UDAs they could yield, rather than on their actual needs. Under the new system it is just the opposite and it is in our interests to do a good job so the patients don’t need to come back so often.

“The automatic six month check-up is gone because patients are now recalled according to their risk and needs, which means we have more time to invest in patients with complex needs.

“We risk categorise patients by asking them what they are doing at home, whether they are eating a lot of sugary food, drinking fizzy drinks, whether they are constantly grazing and so on. They feel it benefits them because it is tailored for them and not just generic advice. The emphasis is very much on showing people what they can do for themselves."

The success of the new way of working at Eastside convinced Wales’s chief dental officer Dr Colette Bridgman and Welsh health minister Vaughan Gething that the scheme should be extended to other practices across Wales.

The changes are being introduced gradually so that the effects can be closely monitored and by April 2019, 52 practices across Wales had some of their targets reduced so that they can start to focus more on prevention.

The practices are still being measured on how they are performing but in different ways, for example on how many individual patients they are seeing.

Eastside practice manager Joel Seith said the number of patients they are seeing has gone up from 10,000 patients to over 13,000 – on the same budget.

After years of neglecting her teeth, bus driver Sharon Brown, pictured below right, is happy to be under the holistic care of 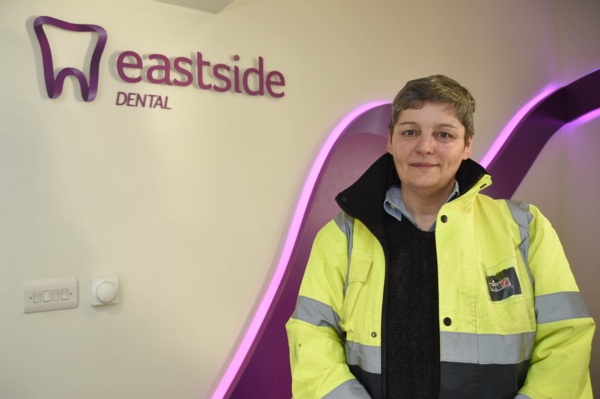 She said: “I spent a lot of time moving around the country when I was younger so it was hard to hold onto a dentist. My job as a bus driver hasn’t helped either because I have to work all sorts of shifts and often long days, so it’s not good for routines and you end up eating all sorts of rubbish and being too tired to look after your teeth.

“I’ve found the staff very helpful and they always remember me personally. I’ve been given a plan today of what I need to do at home and I’m coming back in a couple of weeks to see how I’ve got on.”