A grateful father is to take on a mountainous walking challenge to raise funds for Morriston Hospital’s Jill Rowe Neurology Ambulatory Care Unit which is helping his son get back on his feet.

In September 2019 Callum Fleming was struck down with acute pancreatitis. Within three days the then 26-year-old carpet fitter from Port Talbot had become so unwell he was put on life support in intensive care where he spent six weeks in an induced coma.

He was in hospital for a total of three months, before returning home in early December. But then in late February, completely out of the blue, Callum’s condition began to deteriorate. His performance in physiotherapy worsened and he found himself struggling to walk, let alone get up the stairs at home.

Since then Callum has particularly benefited from the critical care and surgical physiotherapy team at Morriston Hospital, the first of its kind in the UK, which follows up patients after they leave intensive care – first on the general ward and then back home.

He has since been diagnosed with chronic inflammatory demyelinating polyneuropathy (CIDP), which is a rare neurological disorder that causes weakness, paralysis and/or impairment in motor function, especially of the arms and legs.

His condition continues to improve thanks to regular visits to the hospital’s Jill Rowe Neurology Ambulatory Unit, where he receives an infusion of intravenous immunoglobulins (IVIG), over two days, which enables him to walk. He requires this treatment every four weeks, for life.

As a thank you his father, 59-year-old Keith Fleming (pictured above), plans to complete a 550 mile sponsored trek across the Pyrenees in France, setting off at the end of June, to raise money for the Jill Rowe unit.

He said: “Callum has been so ill for so long - the hospital saved his life - and I feel I want to give something back to all the wonderful staff who treated him and continue to treat him.

“He had acute pancreatitis and spent a long time in ITU and was put in an induced coma for six weeks. They twice told me and my wife, Tina, that he would be very lucky if he survived. It wasn’t good.”

But Callum defied the odds and recovered sufficiently to be able to return home only for tragedy to strike once more.

Mr Fleming said: “He came home and was playing darts, it’s good for the brain after being in a coma, and all of a sudden he fell to the floor. It was the start of his second illness.

“We’re not one hundred percent sure why he became ill a second time. Messages from his brain weren’t getting to where they were meant to go and he couldn’t control his body. We had to practically carry him everywhere because he couldn’t stand – it was heart-breaking.

“Because of Covid they sent him home from hospital and the physios came two at a time to treat him in the house.”

Callum now relies upon the unit.

The retired Tata Steel worker said: “It enables him to have the strength for his body to work as it should.

“He’s walking now and doing well but he’s on treatment for life, that’s why I want to do this walk.” 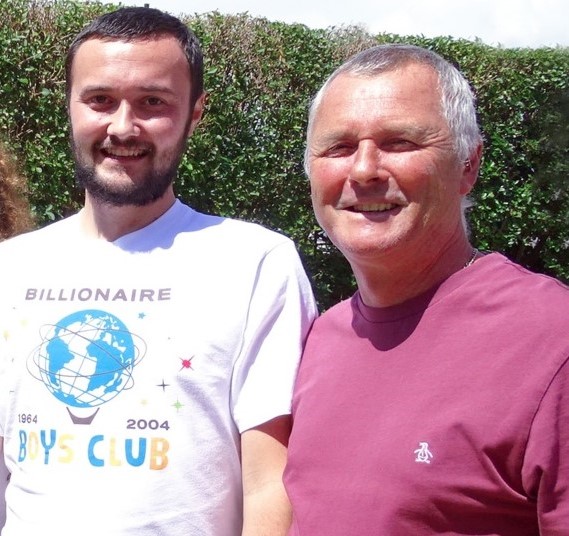 Above: Callum, left, with his father Keith Fleming, right.

Of the challenge ahead, which he plans to complete with a close friend, he said: “I don’t really know why I chose the Pyrenees other than it seemed a challenge. I thought, ‘let’s give it a go.’

“I haven’t done anything like this before. It’s a 50day trek, over around 550 miles, which involves wild camping and having to filter our own water. There are a couple of places where we can stop and have a shower. We have given ourselves 50 days to complete it as we are both over 50 and no spring chickens anymore.

“We will have good days and bad days, we’re going to get blisters, but we’re not on a race.

“I haven’t a clue how much I’m going to raise but I live in a sporting world having coached football for years, with a lot of friends, so I hope everyone donates so we can raise money for such a wonderful unit in Morriston Hospital.”

Unit manager, Alexandra Strong, said: “We are very grateful and thankful to Keith for doing this walk across the Pyrenees for the unit and would like to use any money raised for the benefit of the patients who have treatments with us.”