A book trolley service has been rolled out in Morriston Hospital in an attempt to consign patient boredom to the pages of history.

Such was its success in preventing boredom and promoting well-being it has since been expanded to Morriston Hospital thanks to the support of library services and volunteers.

The idea of reading in hospital beds was championed in NPT Hospital by Dr Aisha Ansar and initially trialled in Ward F (medical ward) by members of staff. 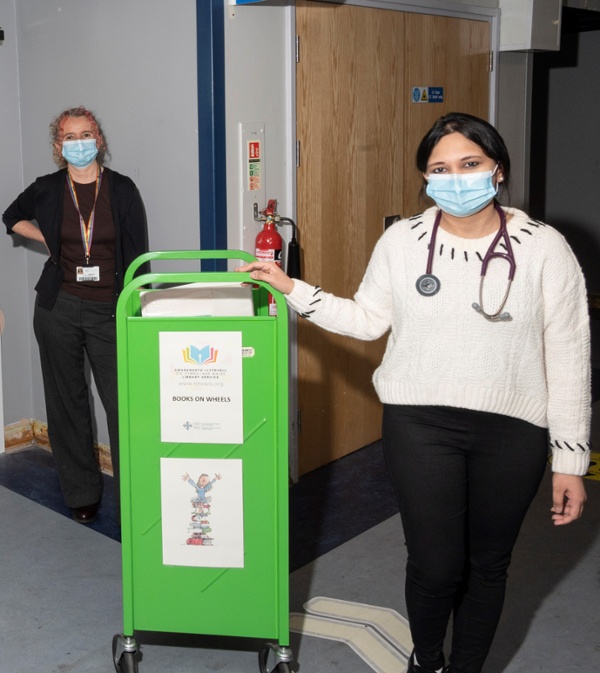 Dr Ansar (pictured above right) said: “We think it’s a great service and the staff of Ward F have been instrumental in helping to set this up. We ran a pilot and the staff themselves took the trolley round to ensure that it could be done safely with minimum disruption.

“Obviously the wards are too busy for this to be a long term solution, so we’re thrilled that the volunteer service has come on board to provide volunteers to take over the trolley rounds. This will allow us not only to sustain the service, but to roll it out to other wards and other Swansea Bay sites.”

Clinical Librarian, Jennie Roe (pictured above left), said: “There’s plenty of evidence of the benefits of reading - it has been used to reduce anxiety and depression, and a study found that participation in activities such as reading and doing crosswords is associated with a reduced risk of dementia. It’s so important to keep patients engaged, particularly in medical wards where they may be for a while.”

Morriston based library assistant, Angela Higgins, said: “It was initially started in Neath Port Talbot Hospital, Books on Wheels, which was a great success. It was then rolled out into Morriston.

“We’ve had support from the medical doctor, Aisha Ansar, who implemented it onto the medical wards, with great success.

“So far, we’ve had such good feedback from staff and patients that we have rolled it out onto the surgical wards and other departments in the hospital.

“It’s of such great benefit to the staff and obviously the patients, for their well-being.

“We have two trolleys at the moment covering medical wards and surgical wards.

“We’ve got fiction, crime, family sagas – in large print as well – and we also give out magazines.”

The health board’s volunteer service is also working with Discovery, a student led charity based in Swansea, whose volunteers have been creating activity packs and puzzles for distribution on the wards.

Angela said: “Some people like a book, some people like a magazine. It’s all about having some sort of contact with people as well. Especially if you haven’t seen your relatives for a long time.”

Book trolley volunteer Susan Davies (pictured in main image) said that it wasn’t all about books.

“Some of them just enjoy having a chat for a couple of minutes,” she said.

“It’s nice to see a different face, I think that’s what the patients quite like. It’s only recently visiting has been reintroduced and you are the only person they saw outside of medical staff.

“Of course, they do like the books - murder mysteries and thrillers seem to be the most popular genre - and they are always surprised to discover that there’s no charge. That’s quite an asset as some are worried that they haven’t got their purses or wallets.

“They are always very thankful.”

To find out more about volunteering opportunities at the health board and ways to get involved please contact the Volunteer Service via email; volunteer.centre@wales.nhs.uk.