A retired reverend geared up for a challenge by cycling 100km to raise funds for the Morriston Hospital surgical team he says saved his life.

Aled Williams underwent a five-hour operation at Morriston Hospital in November 2019 after an abdominal aortic aneurysm (AAA) was detected.

Less than three years later he was back at the hospital but for a much happier reason – to present a cheque for £1,000, which will be put towards training surgeons of the future.

An AAA is a bulge or swelling in the aorta - the main blood vessel that runs from the heart down through the chest and abdomen.

It can be dangerous if not detected early. It can get bigger over time and there is a risk it will burst, causing life-threatening bleeding.

AAAs do not usually cause any obvious symptoms, and are often only picked up during screening or tests carried out for another reason.

That was the case with Mr Williams, who was asymptomatic and whose diagnosis came purely by chance.

He said: “The process began when I read a newspaper article regarding an AAA Screening Programme which was being run by Public Health Wales for men of 65-plus.

“I took the initiative, rang the office in Swansea and was immediately offered an ultrasound scan at my local surgery in Lampeter, where a medium-sized AAA was detected.

“The monitoring of my condition then continued on a three-monthly basis for the ensuing three years or so, until the aneurysm had developed into a large one in August 2019.

“I was then strongly advised to undergo an operation to remedy the situation.” 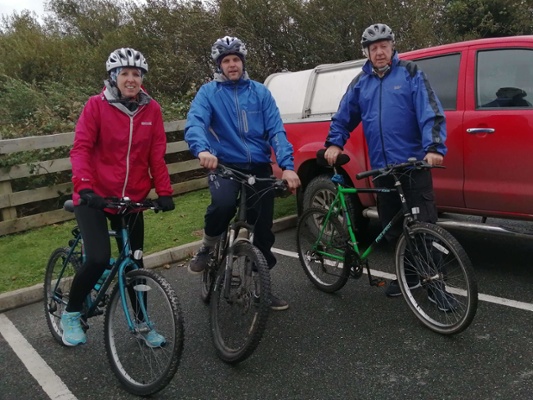 Those at a higher risk of getting an AAA include all men aged 65 with conditions such as high blood pressure, chronic obstructive pulmonary disease, high cholesterol, a family history of AAA, cardiovascular disease, stroke or if they smoke or have previously smoked.

The screening programme has been running in Wales  since 2013. All men in the year of their 65th birthday are invited for an ultrasound scan to detect if there is an AAA present.

How an AAA is managed depends on its size; an annual scan if it’s small and a three-monthly scan if it’s medium.

However, once the AAA reaches a certain size, surgery is recommended to stop it getting bigger or bursting with potentially life-threatening consequences.

Then he set his sights on showing his appreciation for the treatment he received.

The keen cyclist got into gear and on his bike as he looked to raise money for the vascular department by completing 100km (62 miles) over four days.

Accompanied by his children Lois and Rhun, their route started in Llanelli’s Millennium Coastal Path and headed along the Carmarthenshire coast, covering Burry Port and Kidwelly.

Their efforts paid off, with their initial target of £500 easily surpassed.

“I decided to acknowledge in some small way the life-saving treatment, together with a wide range of tests and consultations pre-operation, which I had received so swiftly from the NHS,” said Mr Williams, who served Llanelli, Boncath, Llanddewibrefi, Lampeter, St David’s during his time as reverend, area dean and canon.

“I hit on the idea of the cycle ride as a means of giving something back to those who had given me so much. The path was perfect and not so taxing for a man in his early 70s!

“We were delighted to have raised £1,000 and I must acknowledge the generosity of everyone who donated.” 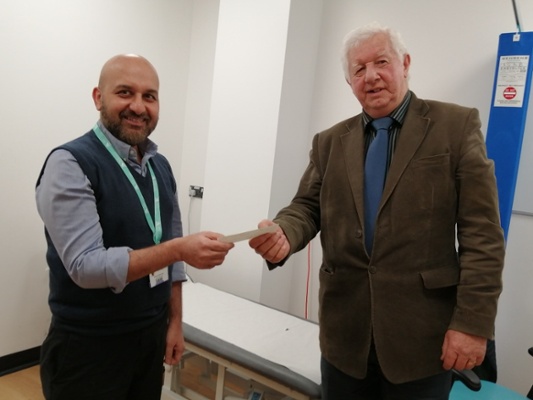 Since completing his cycle challenge, Mr Williams has returned to Morriston Hospital. This time, however, it was in far different circumstances.

With cheque in hand, he presented Kamran Mohiuddin (pictured left), the consultant who performed his surgery, with the £1,000 donation.

"The generous donation has been deposited in the Vascular Surgery Fund at Morriston,” said Mr Mohiuddin.

“This will be used to help train future vascular surgeons.

“It is always a good feeling to see patients do well. It was a pleasant surprise to see Mr Williams a few years after the surgery.

“We are very grateful for the fundraising that Mr Williams and his family has done for the vascular surgery department.”

Following his visit, Mr Williams added: “I shall forever owe Mr Mohiuddin a debt of gratitude. Also the standard of care at the vascular department was second to none.

“One hears so much negativity about the health service, belying the fact that many good things do happen.

“I can honestly say that my experience throughout the process was excellent from beginning to end.

“I have the utmost respect for Mr Mohiuddin, and not only on account of his professional skill and expertise.

“From our first meeting, he displayed a calm and compassionate attitude, while explaining in detail every aspect of my condition and the various steps of the treatment required.

“Despite the obvious seriousness of the process, he was able to instil confidence in one such as myself, whose experience of hospitals and major operations was virtually non-existent.

“Their expertise mean I have regained my strength and feel as vibrant as I did pre-surgery.”

Are you interested in raising money to support NHS services in Swansea and Neath Port Talbot? Did you know that Swansea Bay University Health Board has its own fundraising charity?